The vast majority of these webcomics have since been lost; the webservers taken offline, the HTML wiped, and the images gone. Very few of these webcomics still exist in any form. Most of these were mirrored by the Internet Archive, an organization that began archiving Web pages as early as December 1996. Through scouring the young Web, I have been able to find and independently archive quite a few of these early webcomics. Here, I would like to present to you what I have found.

This page is a major work-in-progress, and I'll add more webcomics over time.

Potentially the earliest webcomic is the International Internet ChainArt Project. In 1993, 23 groups of people from ten different countries collaborated to produce 136 pieces of digital art. Students of the University of Oregon began the project by uploading an image to an FTP server. Each person in the group then downloaded the image and digitally manipulated it before uploading it for the next person.

We know the ChainArt Project took place in 1993, but we don't know when the website was launched. All we know is that the archived version of the website was last updated in March 1994. The image above shows a comic strip that was produced during this project. This may very well be the first ever webcomic, though we cannot be sure. Alas, there are no higher quality renders available for any of the versions of this image. I think it shows a space ship crashlanding in front of a house in Oregon? Destroying all life on Earth?

The project features a lot of weird, experimental art, and I'm glad at least the thumbnails of most of these images are still available.

The generally accepted "first webcomic" is Doctor Fun, David Farley's 1993 daily cartoon. Doctor Fun is consistently absurd and difficult to parse, as Farley produced the webcomic with the attitude that "the internet was exactly the sort of place to put jokes editors think nobody will get." As a result, Doctor Fun never gained too much popularity during its ten year run. I'm not even sure if these images were actually presented through the visual Web browser, now I think of it. Downloading large colorful images was not a very pleasant process, after all.

During those ten years, at least a few people had written Farley to say that Doctor Fun feels like a cartoon drawn just for them. This type of fanmail, Farley said, is "all the success anybody needs." Besides giant royalty payment checks, I suppose.

Clearly, esoteric one-panel cartoons were popular in 1994. When Tomas Christensen got the opportunity to produce a weekly cartoon for MIT's digital newspaper Fishwrap, he certainly dove right in. The weird visual gags are generally more amusing than the vague cultural satire, but neither are particularly exciting.

Christensen was far from the only person in MIT posting a cartoon online in 1994. Mark Hurst's Firehose Tavern is similarly... old.

Students at MIT were doing some pretty ridiculous stuff in the mid 1990s. Nothing shows that quite as well as Pawan Sinha's poster presentation on object recognition strategies used by the primate brain. Here, TV host Larry King and US President Bill Clinton discuss how the human visual system recognizes 3-dimensional objects. Regardless of how silly the concept is, the paper and its presentation seem solid, and I imagine this research is still relevant for machine learning models today.

In 1994, a group of experimental cartoonists came together to create Tool User Comics. Artists like Donna Barr, David Crane, Nina Paley, and Roberta Gregory mainly used the website to advertise their print webcomics, but they also did quite a bit of experimentation. Barely anything is left of the online version of Paley's NinaVision, but it is interesting to see how she set the website up.

I highlight this website purely for the Little Failure page above. The feature no longer functions on the Wayback Machine, but it is easy to imagine how it worked. It is certainly a progenitor of procedurally generated webcomics like Mezzacotta. The very avant-garde Moon Bone also hosted on this website is similarly fascinating.

Turtles.org is one of my favorite websites on the internet! A mid-90s website devoted to Hawaii marine turtles that has barely changed in 25 years. Browsing Turtles.org will provide you with all sorts of information on and photographs of sea turtles, produced by a lovable research and conservation organization. Between the individual turtle biographies is also a fun little webcomic.

This 28-page webcomic is particularly pretty and particularly weird. It reads like a dark Alice in Wonderland taking place entirely within the woman's mind. I am unsure if Handling the Misadventurous Legacy is drawn digitally, or if it consists of low-quality scans of pencil sketches. The artwork is janky and rough, but also familiar and appealing. Sadly, three of the pages have been lost

An absolutely ridiculous webcomic about a stereotypical superhero who saves websites around the world from the evil devil vampire Count Crackula, drawn in the style of a silver-age comic book. Captain Internet seems primarily occupied with making really bad puns, though the story manages to follow a good old Saturday-morning cartoon format. I have to assume this webcomic was produced exclusively as an advertisement for CERFnet.

It is absolutely horrible. I highly enjoy it.

In some ways, Argon Zark! feels like the start of webcomics as we know them. In other ways, it's just another weird experimental pun-fest. The story of a hyper-geek and a hot delivery lady going on a cyberdelic adventure on the World Wide Web is ridiculous and fast-paced, but despite the experimenal art and abstract backgrounds, the places they visit feel tangible and consistent. The background art is beautiful and you feel like these worlds could really exist... even if they are merely representations of mid-90s websites.

Argon Zark! is the bridge between the experimental weirdness of the mid-90s and all the brilliant webcomics that have been released since. We got some actually hilarious jokes here, as well as a terrifying compelling monster. The story is short and sweet, and may give you great insight in what it was like when there were 27,000 websites in total. 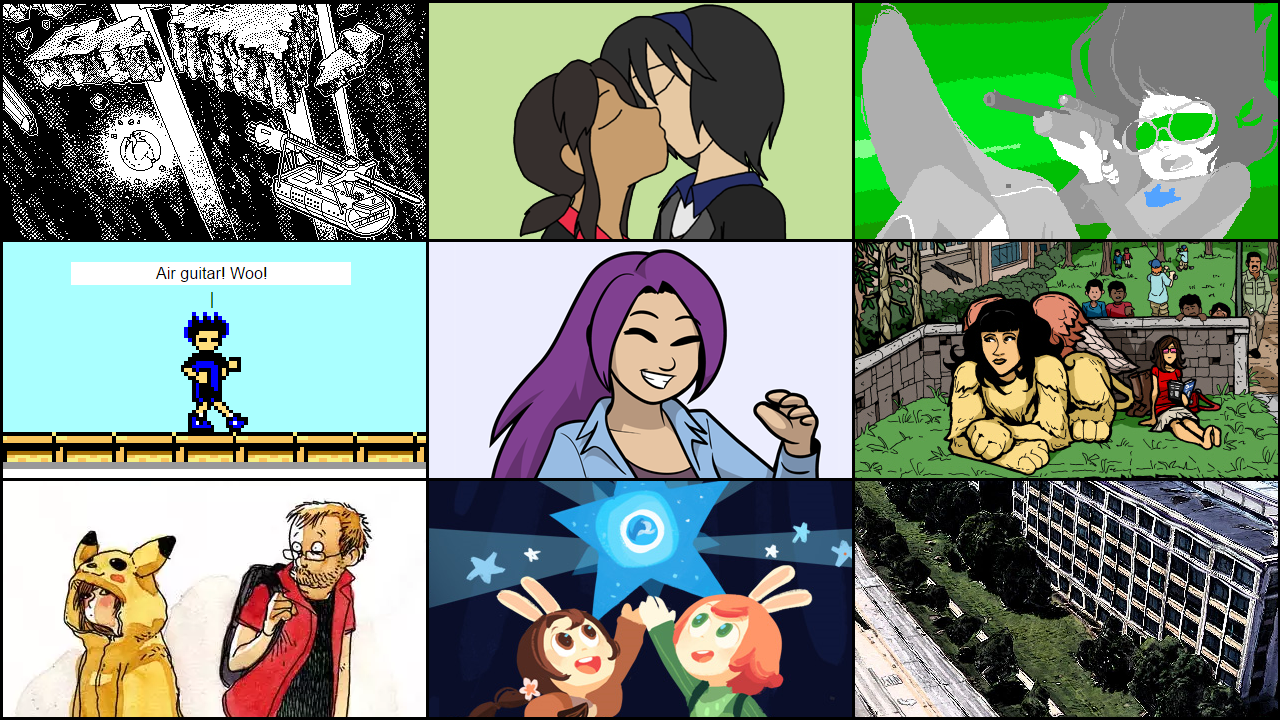